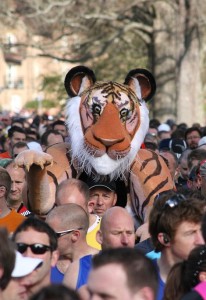 Tiger Spirit: Paul Goldstein Trains for Epic British Charity Runs
He has already climbed Kilimanjaro in his ten-foot tiger suit and roared through nine marathons – but now wildlife photographer is about to embark on his most ferocious challenge yet.

These stunning pictures, taken this week, show the Exodus safari guide training near the Taj Mahal for a punishing week-long charity challenge that will see him run the Brighton marathon, make his way to London on foot, then run the London marathon – all wearing the iconic big cat on his back.

There will also be the small matter of presenting a lecture on endangered predators and wildlife photography at London’s Royal Institution on the Thursday inbetween.

Over the last four years Paul has raised over GBP 100,000 for his beloved tiger charity ‘Worth More Alive’ in Bandhavgarh, India. The money raised is used for schools, digging boreholes and clinics.

The Wimbledon-based 52-year-old explains: “I have two wonderful young sons. I would like them to see a tiger in the wild when they are a little older. Currently I am not that hopeful thanks to the ravages of traditional Chinese medicine and rampant poaching.”

Paul is passionately outspoken on the plight of the tigers and believes pity for them is fine, but more action is needed to stop poachers.

“It is all very well the Royals getting awfully cross about the illegal trade in animal parts but we have to do more than anger and celebrity crocodile tears. It is about shaming the perpetrators of this despicable trade and then going after the poachers.”

He has taken the suit and a touring party to Bandhavgarh where he will play in a yearly charity cricket game as well as hopefully meeting a few ti…
For more information visit http://www.rexfeatures.com/stacklink/KLMIIKLPY