In Memory of Alexis 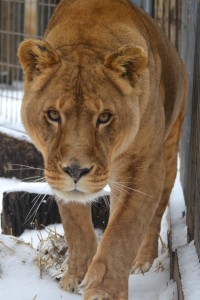 Alexis arrived at Crown Ridge Tiger Sanctuary when she was only nine months old. Previously, she had been housed in a small indoor enclosure at Exotic Animal Paradise. Not only did she not have a proper enclosure but she was severely malnourished (which resulted in a vitamin deficiency), had not touched the ground until she arrived at the sanctuary, and to this day has never seen another lion.

Despite these hardships at such a young age, Alexis blossomed into a beautiful yet tough lion. Our lioness was the diva of the group and liked to do things her way. She loved to play hide-and-seek or tug-of-war with her keepers. Although she loved to play, Alexis did not share her toys or bones and is sure to make you aware of this.

Being the loudest of all the cats at the sanctuary, you could hear her five miles away! Alexis, being the only lioness, certainly added a unique touch to our family at the sanctuary.

Sadly on July 17th 2017 Alexis passed away. She had developed a pyometra, which is an infection of the uterus, and we had to remove it. Unfortunately despite our best efforts Alexis didn't make it through the surgery. Alexis was a one of a kind lioness. You can ask any of her keepers, interns, or visitors she definitely had the biggest personality. She was an incredible cat, that was rescued from a difficult situation. We hope that one day there will be no need for sanctuaries like us, but until then we will continue to give animals like Alexis a voice. For those who were lucky enough to meet Miss Alexis you know she never had an issue being heard.

If you would like to honor Alexis' legacy please consider a Memorial adoption. You can find out more HERE.