Ligers, Tigons, and Hybrids, Oh My! 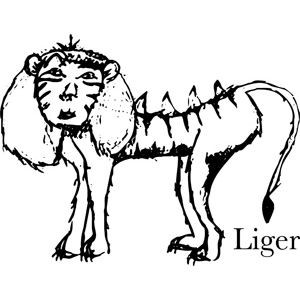 ? ? ? If you?re familiar with the movie Napoleon Dynamite, you?ve probably heard of the liger which is, according to the title character, ?like a lion and a tiger mixed… bred for its skills in magic.? We laugh at the absurdity of yet another Hollywood hybrid?a mishmash of creatures found only in the laboratories of mad scientists on movie sets?but what many people don?t realize is that such an animal actually exists?and it?s no laughing matter.

Traditionally, a species is thought of as being a group of similar organisms that interbreed with one another and are sexually isolated from creatures of other species; however, there are a few exceptions to the rule, though the offspring of these mixed species pairings are typically infertile. One such exception is the liger.

The offspring of a male lion and a female tiger, the liger is a large golden-colored cat with spots on the forehead, pale 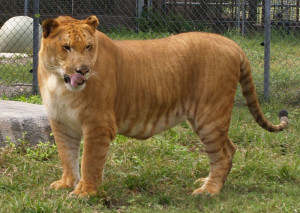 striping along the back, and?in some males?a rudimentary mane. These massive cats, which average around 1000 lbs and stand nearly twelve feet tall on their hind legs, have larger, thicker bones and longer teeth than both lions and tigers. In a natural situation, female lions possess the gene that limits growth while in tigers it is the male; thus, ligers (as the progeny of a male lion and a female tiger) do not receive a copy of the gene from either parent and, consequently, suffer from gigantism, very quickly outgrowing both their mother and father. A ninety day-old liger cub, for instance, is about a month ahead of its tiger counterpart in terms of size; by the time it is fully grown, the liger will be nearly double the size of an adult Siberian tiger, making it the largest cat in the world. Currently, the record for the biggest non-obese liger is approximately 900 lbs, though other cats have tipped the scale at 1200 and even 1600 lbs. Height???-wise, an adult liger is typically about 4.5 ft tall at the shoulder and 6 ft tall at the tips of the ears when standing. To sustain such a large body, the liger requires an average of 25 lbs of meat per day?more than double the diet of a typical lion or tiger in captivity.

Such outrageous nutritional needs make caring for a liger an expense that few facilities can afford when their resources should be focused on conservation; in fact, AZA accredited zoos?which breed animals in accordance with the Species Survival Plan designed to promote the conservation of specific species and subspecies?do not promote the breeding of ligers at all, as they are an unnatural phenomenon found only in captivity and hold no conservation value. Nevertheless, the imposing size and exotic allure of the liger makes them a real crowd-pleaser, an animal oddity fit for Ripley?s Believe-It-Or-Not that attracts hundreds of visitors?and dollars?to liger-holding facilities each year, resulting in the continued breeding of the cats at supposedly reputable menageries and wildlife parks across the country. The problem with this?besides having no conservation purpose?is that ligers, as hybrids, are subject to a host of biological and social issues.

The liger?s increased growth rate and enormous size, for instance, can cause the tigress giving birth to have a difficult delivery, endangering both the mother and her liger cubs, which may be born prematurely or require a Caesarian. Common problems in cubs that survive are neurological disorders, obesity, genetic defects, and a shortened lifespan; though a few have reportedly made it to their twenties, many don?t survive past the age of seven. Moreover, male ligers have lowered testosterone levels and sperm counts, rendering them infertile while females, though capable of reproducing with either a lion or a tiger, often give birth to sickly cubs that don?t survive.

Ligers may also experience social difficulties, as they inherit habits and communication methods from both parent species. For example, ligers prefer to live with other cats like their lion father but also enjoy swimming like their tigress mother. Their language is a confused mixture of dialects: When roaring, they sound like a lion, but they are also capable of making a sound known as a chuff?a happy greeting noise that is unique to the tiger. 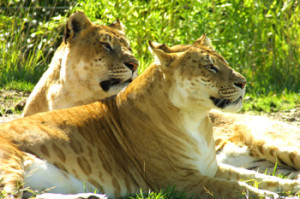 ? ? ? ?Tigons?the result of pairing a male tiger with a female lion?face similar issues. Though not as popular as the liger, the tigon was once the preferred big cat hybrid, falling out of favor in recent times due to their difficulty to breed and significantly smaller size; while the liger inherits no growth-inhibiting genes, the tigon receives a copy from each of its parents, limiting its size to 350 lbs or less. Like ligers, tigons speak a mixture of both their parents? tongues with the surprising ability to roar like either a lion or a tiger. Male tigons also suffer from infertility.

At the present time, there are only about one hundred ligers (and even fewer tigons) known to be in existence, thirty of which reside in the U.S. In some countries, such as Taiwan, it is actually illegal to breed hybrids of protected animals, as it is considered a waste of genetic resources and?perhaps more importantly?hybrid animals may not be offered the same protection as their parent species. The United States? Endangered Species Act, for instance, protects the endangered tiger and makes it illegal to trade in tiger body parts; lions are considered vulnerable but have not yet been given protection under the act, though if their numbers continue to decline, it is certainly a possibility. However, as ligers and tigons are neither fully lion nor tiger, they are not considered in need of protection, and even if lions were added to the endangered species list, trade in hybrid body parts would not be illegal under the current set-up of the law. This loophole could potentially fuel the breeding of hybrid animals as a source of otherwise unobtainable goods found on the black market.

Because there are so few ligers and tigons in the world, little research has been done to determine whether the many health issues often associated with the cats are, indeed, the rule rather than the exception and whether their social habits cause actual psychological distress. Nevertheless, the decision to make a hybrid creature solely for the purpose of our entertainment and amusement when its parent species are going extinct in the wild seems a terribly selfish excuse to breed. In short, by breeding ligers and tigons, we attempt to play God, creating potentially unhealthy, unstable animals while ignoring the plight of those already endangered; it is unfair to both the hybrid offspring and its parent species, and there is nothing ?magical? about it.