The Illegal Trade in Tiger Parts

Eyeballs, whiskers, bones, brain?the list sounds like part of a multiple choice question in an anatomy class. But did you know that in tigers, these body parts are illegally harvested for medicinal purposes??In traditional Chinese medicine, nearly every part of the tiger has some sort of pharmaceutical value and may be used to treat conditions ranging from epilepsy to impotence.? Tiger fat, for instance, is used in balms to treat rheumatism. Whiskers are thought to cure toothaches, while the remedies for laziness and pimples involve the use of tiger brain matter. 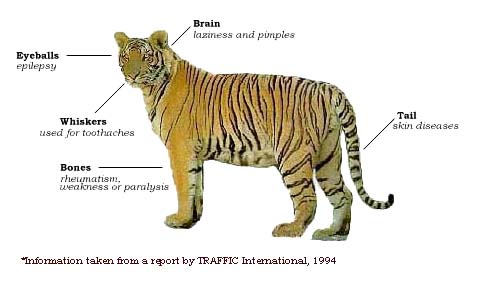 Raking in nearly $6 billion a year on an international scale, the trade in wildlife parts is the third most profitable on the black market after the drug and weapons trade. Currently, almost 60% of the Chinese population and at least 10 million Americans believe in the medicinal use of tiger body parts. Other countries involved in tiger trade include Great Britain, Japan, Taiwan, South Korea, Vietnam, and Hong Kong, which accounts for nearly half of the business. In these countries, a pair of tiger eyes can sell for $170. A paw is worth $1000. Tiger bone may be sold in powdered form for anywhere between $64-$168/lb or steeped in liquor to make ?tiger wine,? which has been known to sell for over $30,000 a case! A prized pelt could fetch as much as $20,000. 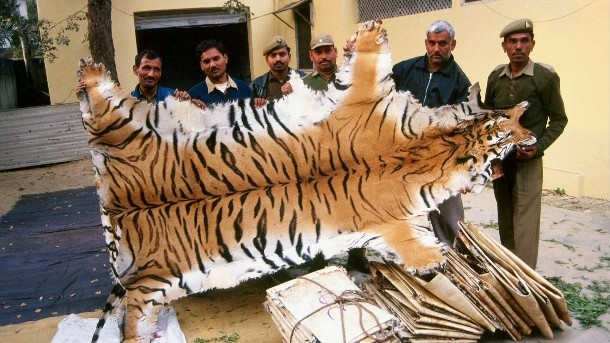 Because of this black market trade, tigers are, unfortunately, often worth more dead than alive, and poor people living in the tiger?s native range frequently turn to poaching to supplement their income. As a result, tiger numbers have plummeted. Over the past century, three subspecies (Bali, Javan, and Caspian) have gone extinct with a fourth, the South China tiger, currently considered ?functionally extinct,? as none have been sighted in the wild since the 1970s. Poaching is largely responsible for these losses and accounts for at least 100 tiger deaths a year, with some estimates placing the death toll as high as one tiger lost per day. Currently, the wild tiger population is approximately 3200?only about 3% of what it was a hundred years ago?and according to a 2010 estimate, if poaching and habitat loss continue at the present rate, wild tigers could be entirely extinct by the year 2022.

Here are a few things that you can do to help end tiger trade: