A Blast from the Past: Tigers! 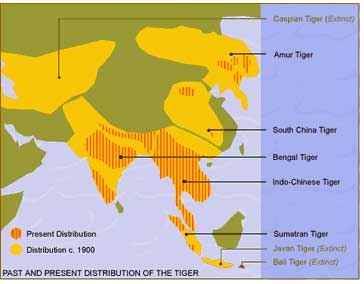 ??????????? Balinese tigers once roamed Bali, as they were native to this small Indonesian island.? Also known as Bali tigers, these cats were the smallest of all 9 subspecies of tigers and some scientists argue that Bali tigers are actually a 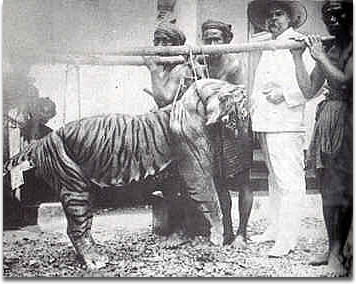 subspecies of the extinct Javan tigers.? Males typically weighed up to 220 pounds, while females weighed up to 180 pounds.? These cats were about half the size of Siberian tigers (the largest subspecies).? Their fur was short and was a darker color orange than typical for the current subspecies of tigers.? Bali tigers also had fewer stripes than usual, with black spots scattered between the stripes.?

??????????? The island of Bali is small and could not sustain a large population of tigers in the first place; therefore, Bali tigers had a small population size to start.? In addition, human settlement and demand for agricultural land aided in their small population size.? This increase in human population led to expanding cities and large logging operations, which resulted in deforestation and loss of crucial habitat for these tigers.? Decreasing this habitat for Bali tigers resulted in less territory, fewer prey, and fewer places to hide from humans as hunting also added to the decrease of this population.? These tigers were trapped, with only a small amount of habitat left, as well as no place to run because they were located on an island.??

The last known Bali tiger, which was an adult female, was killed in SumbarKima, West Bali, on September 27, 1937.? However, sightings of this subspecies still persisted for years later, up to the 1940s, but were never proven.? Being the first subspecies of tigers to go extinct, Bali tigers were never held in captivity and never displayed in a public zoo.? In addition, they were never captured on film or motion picture alive.? Still, body parts such as skulls, skins, and bones, are preserved in museums today.? Bali tigers continue to play an important role in Balinese Hindu Religion to this day. ?

Sparse forests, South and West of the Caspian Sea were once home to Caspian tigers, which are also known as Hyrcanian or Turan tigers.? These tigers lived in Afghanistan, Iran, Iraq, Pakistan, Russia, and Turkey.? Caspian tigers, though larger than Bali tigers, were not as massive as Siberian tigers, weighing up to 530 pounds for males and up to 300 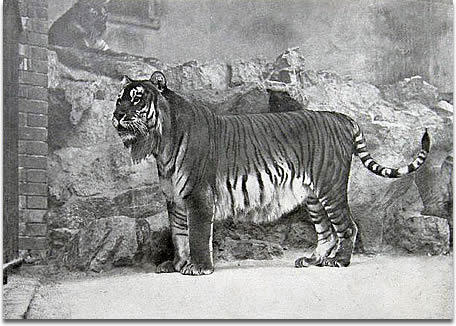 pounds for females.? The stripes on this subspecies were narrower, fuller/longer, and closer together than for Siberian?and Bengal tigers.? Their stripes were also shades of brown or cinnamon, with pure black color found only on the middle of their back, tip of their tail, head, and neck.? Siberian/Amur tigers are the closest living relatives to Caspian tigers.

The third extinct subspecies of tigers are Javan tigers from the Javan Island in Indonesia.? In looks, these tigers are most similar to Sumatran tigers; however, their closest relatives are Bengal tigers.? Male Javan tigers weighed up to about 310 pounds, whereas females weighed up to 250 pounds.? Their stripes were long and thin, and were also more numerous than Sumatran tigers.? They also had a long and narrow nose, along with the longest whiskers of any other subspecies.? The smaller size of Javan tigers is assumed to be due to Bergmann?s rule, which states that populations of the same species that are of smaller size are found in warmer climates, and those of larger size are found in colder 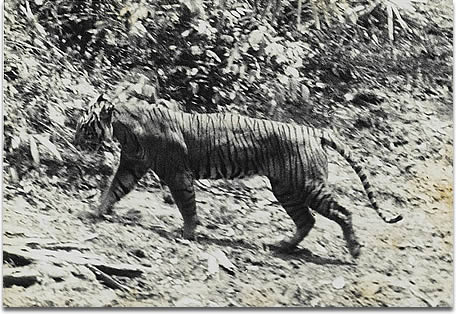 ??????????? Javan tigers are believed to have gone extinct between the 1950s and 1980s.? Habitat destruction is one of the main reasons for their extinction, along with being hunted.? In addition to this, their main prey base (rusa deer) was lost due to disease.? Nature reserves were established in the 1940s for these tigers; however, they could not help the population.? Javan tigers were kept in Indonesian zoos, but these zoos were shut down during World War II.? After this, Sumatran tigers became easier to obtain than Javan tigers.?

????????? The exact time of the extinction of Javan tigers is not known; however, it is thought that these tigers were last sighted up to the 1970s.? There was a supposed sighting around MountBetiri in 1979.? However, the last positive Javan tiger recorded was in 1976 from Java?s MeruBetiriNational Park.? After this, other sightings were suggested, but no proof existed.?

????????? Even though 3 subspecies of tigers are extinct, 6 more do still exist.? These six include Siberian, Bengal, Sumatran, South-China, Indochinese, and Malayan tigers.? All of these tigers are endangered; however, Sumatran tigers and South-China tigers are considered critically endangered.? Fewer than 3,200 tigers remain in the wild within only less than 7% of their historic range.? Now more than ever, conservation organizations, local and national governments, and communities are all working together to fight against the threats that tigers are facing today.? 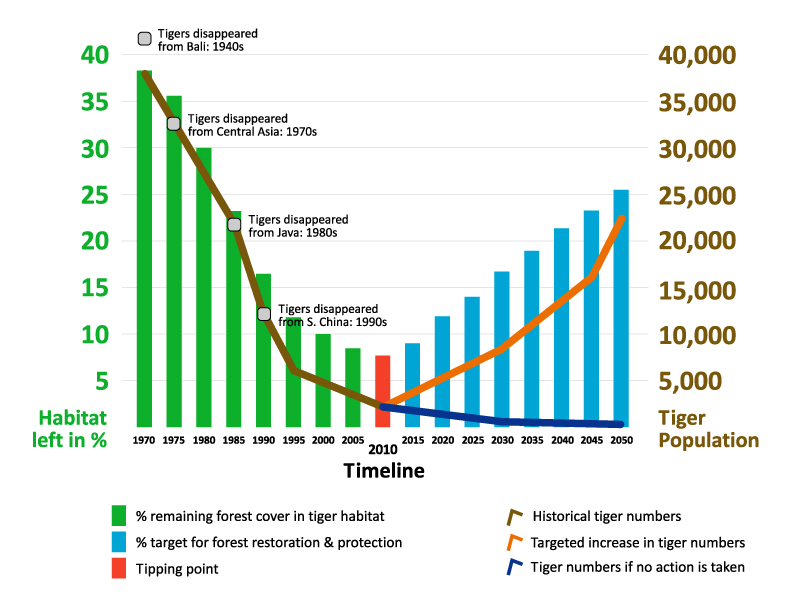