You may already know tigers are endangered, but you may not have realized that captive tigers and other big cats are facing a different crisis in captivity. Due to poor regulations nobody truly knows how many tigers are in captivity, but there are estimated 5,000-10,000 big cats in captivity in the US. These numbers stagger over the wild population, estimated at 3,200. 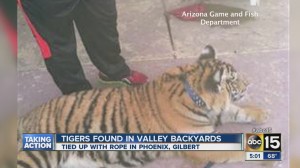 In short terms, the big cat crisis is the overpopulation of big cats living in captivity. A major reason for this overpopulation is an activity known as cub petting, in which people pay to pet, feed, play with or get their pictures taken with big cat babies.

Bred specifically for this industry, big cats are torn from their mothers at birth and suffer serious neglect and mistreatment from handlers. After just a few months they are too large to be handled, so they are warehoused in substandard facilities, sold as pets, or even killed. All too often, big cats are kept in small cages, fed nutritionally deficient diets, and denied adequate exercise and veterinary care. A few end up at professionally operated sanctuaries, but it puts a huge burden on these sanctuaries logistically and financially. In addition, there are more captive big cats needing care than there are places for them in reputable sanctuaries.

Meanwhile, in a never-ending cycle, new cubs continue being bred, used for public contact, and disposed of—all the while increasing the number of captive big cats in our midst.

All of these captive big cats are dangerous to public safety. Since 1990, more than 400 dangerous incidents involving captive big cats have occurred in 46 states and the District of Columbia. Five children and 19 adults have been killed, and hundreds of others have been injured, with some losing limbs or suffering other traumatic injuries. Incidents like this also put police officers and other first responders in harm’s way. That’s why the Fraternal Order of Police, the National Sheriffs’ Association, and the Small & Rural Law Enforcement Executives Association endorse this legislation

31 sanctuaries were interviewed for a survey by IFAW to find out opinions related to big cat private ownership. According to the survey it would cost $55 million for these sanctuaries to double the amount of rescued cats they could take in. Rescuing is not the answer. A ban on private ownership is desperately needed to protect big cats from ending up in back yards and being used for profit.