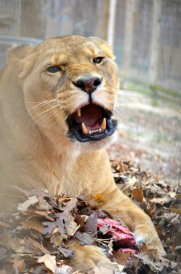 Lions, being social animals, hunt in groups and therefore eat in groups. Where solitary cats have all of their kills to themselves, lions must secure their portion of the kill and defend it from their pride-mates. Its common to see Alexis growling at any person or cat who comes too close to her food, and if no one is around, she will even growl at her back feet or tail in attempts to protect her food. This behavior is very instinctual because even though she has never seen another lion or been part of a pride, she knows she must protect her food from any possible competition. Her tendency to growl while eating is an attempt to intimidate anything that could take away her food.

Tigers often communicate with each other through scents. Because they are solitary animals, there are very few instances of face-to-face communication, so by leaving scents behind, they are able to know who has been in this spot and when. They also can tell gender based on scent and where the females are in their reproductive cycles. Thor here is leaving her scent behind on this platform through the scent glands on her face. The smells she’s leaving behind will be there later when another cat walks by the platform.