The tiger, Panthera tigris, is one the largest of all the feline species. They can weigh up to 800 pounds and have the bite pressure of 1,000 pounds per square inch. One would think that a beast of this size would be king of his habit but sadly the tiger population in the wild is declining at an alarming rate; with only 3,000 left in the wild. Human population on the other hand is growing, the world population surpassing 7 billion.  Tiger’s natural territory covers most of Asia, where the majority of developing nations can be found. This growth in human population in what used to be tiger country has not only brought forth more conflict between human and tiger, it has opened up an opportunity for economic growth. The growth has lead to a higher demand in tiger bones.

There has been a growing demand for tiger parts in Western Asia and China. The Chinese believe that parts of the tiger can cure many illnesses, though there is no scientific proof backing up these claims. Tiger parts are used to help cure anything from insomnia to alcoholism and people will use any part from the teeth to the feces. The high demand is met through illegal poaching in India and other parts of Asia since China has destroyed their own tiger population. The tiger population has declined 97% in this century. In Maharashtra alone 14 tigers have been found dead in Tadoba Tiger Reserve, most of these tigers were chopped up with their heads and paws missing. The most common of the tiger subspecies, the Bengal, only has about 2,500 remaining in the wild. The numbers go down from 600 to 650 of Indochinese tiger and 400 to 500 of the Malayan, the Sumatran, and the Amur tiger. 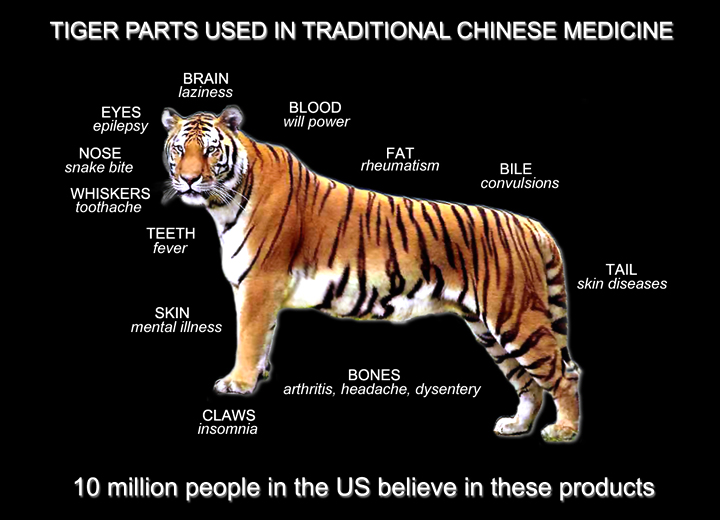 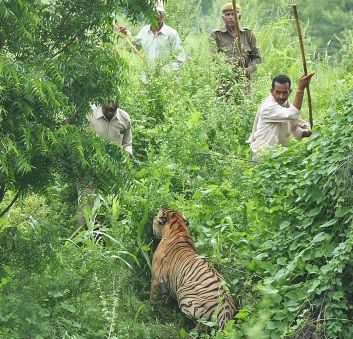 oachers will do anything to take down one tiger. It is not uncommon for the forest guard, people who protect the forest and the animals that live in it, to find snares. Tigers are not as easy to hunt as an elephant or a rhino due to the fact that they are solitary animals and their territories can stretch up to 30 square miles. The iron trap is set by a watering hole and the poacher will lay in wait for a tiger to stumble upon the hidden trap. The teeth of the trap cause great pain, which can cause the tiger to scream in pain that can wake a sleeping forest guard, so the poacher must kill it quickly. This trap will hold the tiger while the poacher kills it. Snares are the simplest way to poach a tiger. At times some corrupt forest guards will also accept payments of $5,000 to $100,000 from the poachers in exchange for a tip as to where a tiger can be found.

Despite the difficulties of enforcing laws that protect tigers from poaching there are some in place. Asian countries are starting to take the decline in the tiger population very serious as they are beginning to understand the economic benefit of having living tigers. In Maharashtra, India, forest guards have been ordered to shoot poachers on sight if they do not surrender. The hope is that this new law will discourage poachers from hunting in the forest reserves. The Endangered Species Act of 1973 and the convention on International Trade in Endangered Species of Wild Fauna and Flora (CITES) are two laws that are enforced in the United States. These laws prohibit the destruction of endangered species habitat as well as the trading of endangered species whether dead or alive. It is possible to help by donating to conservations groups such as the Nature Conservancy and the World Wildlife Fund.